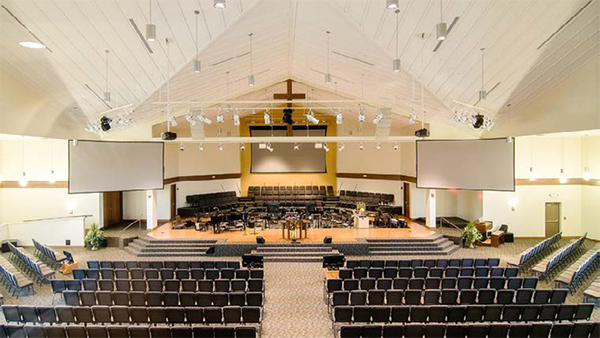 It all began with a family from Glad Tidings Temple in Vancouver, Canada. God chose to use a willing couple, Hugh and Audrey Layzell and their four children: Sharon, John, James, and Ruth. In 1960, before Hugh and Audrey had their fourth child Ruth, they were sent to Uganda by Glad Tidings. Glad Tidings was being pastored at that time by a deeply spiritual man, Pastor Reg Layzeli. This same man, Pastor Reg Layzell is widely believed to have been used by God to restore the Church to the truth of the power of praise, back in 1948.

Ms. Gaglardi was in the church praying for the nations when she experienced a vivid vision: Fire in a visible form showed up and the whole room seemed to have been invaded by powers beyond human understanding. The fire was in the form of a huge blazing ball, fiery tongues all around it, furiously burning and flaming out in every direction. In the midst, appeared an unknown written, human-lettered word.

“What do I do next?” the amazed Miss Gaglardi, asked herself, caught up in it all. “I will seek guidance from my senior Pastor,” she decided.

Although the human lettered word was not known to Pastor Gaglardi, it was, however, clearly sealed and engraved on her heart. Pastor Gaglardi got up from her knees and went to the senior pastor to see if the vision had any real meaning. This took some boldness because the senior pastor was a no nonsense guy, not one to be flippant about spiritual things. As he listened and gazed at her with his strong, inquisitive eyes, he asked in a booming voice; “Are you sure of what you are saying?”

She answered respectfully, “Yes Pastor… very, very sure.” The word was “U-ganda”. Glory be to our God, who rules over the whole world and to whom all nations are each considered, for a special blessing of salvation through Jesus Christ.

They guessed that the word “Uganda” sounded like an African word. Together they went to look at a big world map to see if they could find anything of the kind on the continent of Africa. In those days, Uganda wasn’t known as it is today, so it took faith to find a word that they weren’t even sure existed. As they continued searching on the big world map, however they came across a landlocked country in East Africa on the north side of Lake Victoria, the largest lake in the whole of Africa. There they found the word “Uganda.”

The whole church went into extended prayer, seeking the mind of God in the vision. It is exciting to know that God was looking for someone who was willing to come as a missionary to those of us who sat in darkness in Uganda. He loved us even before we ever thought of loving him. Surely he loves all mankind.

The Church in Vancouver continued to ask God to open a door to Uganda. At first, it seemed impossible. The missionary sending church in Vancouver wrote to the Ugandan then colonial authorities, seeking for permission to plant a mission in the country. The British governor referred the request to the Archbishop of the Anglican Church, who denied the request. Nevertheless, the church in Vancouver continued in prayer. In 1956, Hugh and Audrey Layzell were asked to go to Kenya by the Elim Mission of New York. Consequently, their home church in Vancouver agreed to send them to work in Kenya, believing that the door would open to Uganda. And it surely did. Glory be to God! Hugh, Audrey, and their children entered Uganda in 1960. They began by preaching under a mango tree, somewhere in Kampala Nakawa area.

Zechariah 4:10 – For who hath despised the day of small things? For they shall rejoice, and shall see the plummet in the hand of Zerubbabel with those seven; they are the eyes of the LORD, which run to and fro throughout the whole earth. In the book of Job 8:7 reads; Though thy beginning was small, yet thy latter end should greatly increase.

What has been the impact on Uganda of the gospel brought by the missionaries? It was in 1960 that the “full gospel,” with its Pentecostal signs and wonders, came to Uganda. The first missionaries to come with this gospel were Hugh Layzell, his wife Audrey, and their three children. The move of God became, at that time, known as “Enjiri erina amaanyi”, meaning “the gospel of power.” Many times also, the above move of God in the ‘60’s used to be referred to by many as “Gugudde”, meaning “rolled away”. During that time the whole of Uganda was being influenced by two main forces:

When the “full gospel” came in 1960, the whole country of Uganda was as the Bible describes in Matthew 4:16 “The people which sat in darkness saw great light; and to them which sat in the region and shadow of death light is sprung up”.

After a while, God saw fit to send another couple to Uganda to increase the momentum of the then wave of evangelizing. They were Mr. and Mrs. Dauda evangelists from Canada. They were warmly received by the Layzells, and together they decided to stage the first evangelistic crusade ever held in Uganda. God anointed this first crusade. The Word of God was moving so powerfully that even the princess who was the real nearest of kin, a sister, to the king of Buganda, received the gospel as she heard the preaching while sitting on the balcony veranda of her home. Her home is a two story house near the place where the crusade was held. The princess believed and chose to come down to the crusade to give her life to Jesus, the KING of kings, leaving behind her own royal dignity in the process. I myself also was a young man then, and I, during the same crusade, gave my life to the Lord of lords, along with many others at that time. Thanks be to him, the only Lord of lords; Jesus Christ our King of kings, because I can’t even imagine where I would now be, if I had not given my life to Jesus at that time. For surely, at that time, I was pursuing hopelessness.

Mrs. Dauda was the main speaker at the crusade. Her husband and Hugh Layzell were the organizers. Now, as I look back on that time, I perceive that Pastor Layzell was more than just an organizer. He was actually the missionary sent by God himself to remain and establish the work that was initiated by the God of fire.

The gospel was so powerful that people came from many parts of the country, near and far to hear the good news of salvation for the first time. These first crusades were staged at the outskirt of Kampala City, just near the Palace of the King of Buganda. Many miracles were witnessed by all that attended the weeklong crusade. Sick people were healed, and many of us believed on the Lord Jesus Christ. These words of Jesus in Mark 16:17-18 were fulfilled: “And these signs shall follow them that believe; In my name shall they cast out devils; they shall speak with new tongues; they shall take up serpents; and if they drink any deadly thing, it shall not hurt them; they shall lay hands on the sick, and they shall recover.”

Songs of deliverance were being heard everywhere. Surely the true light of salvation had come. Healing of all kinds of diseases became daily crusade events. People from many parts of the country flocked the crusade venue. The demons possessed were set free, and those who came broken-hearted went back rejoicing with renewed life. The lame walked, the blind saw and the deaf had their ears’ blockages broken through and the powerful gospel of our Lord Jesus Christ penetrated into their being.

One elderly man gave his testimony of being delivered from the grip of the enemy. He said that he had been tormented for a number of years with a lot of fear and demon oppression. He went to a witch-doctor, who gave him charms that were very expensive along with a small staff. When the man entered his home, the staff turned into a snake and slithered away and hid in the ceiling of his house. At night, the snake went out and invited other snakes to live in the ceiling with him. From time to time, the man and his family members would wait for the snakes in the ceiling to spit saliva of blessings on their heads, but, instead, they only received more spiritual and physical torments.

When the elderly man gave his life to Jesus, he went home rejoicing. Now being a new creature, he realized he could no longer expect blessings from snakes. Therefore, on entering his house, he ordered the snakes, in the name of Jesus Christ, to vacate the premises, and they all left. Oh! How blessed the elderly gentleman and his family members were when Jesus became the Master of their lives and home! Thank you, dear Jesus Christ. This testimony above is just one of many given by the thankful people delivered during the first crusade and ones that followed after the gospel of power had taken root in Uganda

Another testimony involved three ladies. Two sisters and a friend went to the crusade and were saved. The two sisters each bought a new Bible that was sold at the crusade, thinking that the old Bibles they formerly possessed did not have the same words of life as those that were being  reached in the crusade. The next day their friend came to join them at the crusade. She indicated to them that she lacked a Bible, and she wondered if they had one extra for her to borrow. The two sisters said to her, “Friend, we bought new Bibles from the crusade. They are the ones with life-giving words, and the preachers are only preaching from the new Bibles. The old ones we’ve had for many years will not be of any use to you.” The friend said, “Just give me that old one of yours for me to carry, but at the crusade we will use your new Bibles.” At the crusade, however, the three ladies were surprised to find that the old and new Bibles were all the same. They realized that the problem had not been with the Bibles, but with their spiritual eyes. Surely, the people that sat in darkness saw a great light.

Ephesians 5:8 – For ye were sometimes darkness, but now you are light in the Lord: walk as children of light. For God so loved the world, that he gave his only begotten Son, that whosoever believeth in him should not perish, but have everlasting life. John 3:16