Immaculate Akello (not real names), was diagnosed with fibroids at the age of 21 while studying at university. She narrates her ten-year ordeal to Agnes Kasemiire.

During my adolescence, I would suffer severe abdominal pain during my menstruation period. The bleeding was always so heavy that sometimes lasted a week.

I confided in my mother about the painful periods and she assured me that my health would stabilize when I grew older. I would take pain killers to manage the pain.

In 2007 while at university, I noticed I was developing a swelling in my lower abdomen that caused a lot of discomfort.

I decided to go to Mulago National Referral Hospital, to seek medical advice. After making consultation, an ultra sound scan was recommended and the results revealed I had a tumor; a mass growing in the lower part of my abdomen.

I was advised to go back to hospital the following day.

When I informed my supervisor at work, she suggested I go to Surgery Plaza in Kampala for more investigations.

Again, the results indicated that I had a tumor. I was referred to Nsambya Hospital and subjected to more tests, which revealed that I had fibroids.

The doctors recommended that I undergo an operation to get rid of them.

A date for surgery was set. Unfortunately, the operation was not successful.

Only a small part of the tumor was removed because I bled excessively and the surgeon decided to discontinue the operation.

I was discharged, but my health did not improve. My abdomen remained swollen, and I continued experiencing heavy and painful periods.

The same doctor who had operated on me suggested I go back for another operation, but I feared. When I confided in some people, I was advised to try herbal medicine.

I opted for the herbal idea, and I was connected to a herbalist who runs a clinic in Kireka, a Kampala suburb. After examining me, he said my situation required admission. He referred me to a hospital in Nakaseke district that offers herbal treatment.

I was admitted at this hospital and started on treatment. Upon taking the medicine, I responded positively, the abdomen would reduce in size but after two weeks or a month it would swell again. This would happen every time I got treatment.

Gradually, the abdomen continued to swell. After a year of admission without relief and paying close to Shs 2.5 million, I gave up and decided to go back home.

I was anemic and my legs had started swelling, so I decided to seek medical assistance again at Mulago hospital.

Unfortunately, I landed in the hands of a pharmacist who convinced me that he would give me medication to reduce the size of the tumor, and also boost my blood levels.

I was started on treatment, but it was very costly. I would pay Shs 1.5 million for a month, but still there was no change.

It was then that I decided to go back and carefully made sure I consult a gynecologist at Mulago hospital, who recommended three injections to be given monthly for three months.

But after three months, there was no improvement, my stomach just continued to swell.  He then suggested surgery, but I refused. Eventually I abandoned him and started taking food supplements.

Later, my brother offered to take me to Nairobi for treatment, but I still did not respond to the treatment I was given. I became so desperate and decided to come back home.

People advised me to resort to churches for prayers, but I did not improve.

Later, I was again advised to go to Democratic Republic of Congo (DRC) for herbal medication. I travelled there and was given medication for two months, but there was no change.

There was no change and the stomach continued to swell.  I left DRC and was referred to Tanzania. Still I did not respond to treatment. At that point I decided to return to Uganda.

I visited Kibuli Hospital and the doctors suspected I had cancer and wanted to take a biopsy.

I feared and decided to go International Hospital Kampala (IHK). I am glad my brothers were very supportive; they continued giving me financial support.

I connected with a consultant, who took me through several tests, luckily all my internal organs were fine.

But they also suspected cancer and took a biopsy which was sent to South Africa. The results later turned out to be non–cancerous.

After all the tests had turned negative, I was handed over to a gynecologist called Dr Alex Koulik. But at that point I looked terrible, with an extremely extended abdomen.

I was anemic and besides, fluid was oozing out of my stomach through my umbilical cord. I was constantly bleeding, so I had to wear pads all the time. I hated myself.

A date for surgery was set. I was admitted, but could not be operated upon because the hospital did not have sufficient blood.

A second appointment was set and I was operated upon successfully. A tumor of 32 kilograms and 10 liters of fluid were removed.

Upon gaining consciousness, I felt very awkward because I was used to a swollen abdomen.

My abdomen muscles were sagging, so the doctors advised me to tie a cloth around the abdomen to tone the muscles.

I was discharged after 10 days and advised on what to eat to boost my blood levels since I was anemic.

The impact of prolonged battle with fibroids was so severe on my health. I was weak and lost my memory, although my health has now stabilized.

I am glad that my family was very supportive. I am also thankful to the consultant gynecologist, who saved my life.

They are smooth non-cancerous tumors that grow in the uterus and can be as small as a pea or big enough to make one appear pregnant.

The cause of uterine fibroids is not known. However, their growth is linked to the oestrogen, a hormone responsible for the growth of the uterus wall.

In fact, fibroids never develop before the onset of menstruation when the female body begins producing oestrogen. Fibroids occur during the reproductive years, but the peak is during the 40s and 50s.

Dr Nabunya adds that women who have not had children are also at a high risk of getting fibroids.

Do fibroids cause infertility?

“Fibroids can be associated with infertility and vice versa. The effect of a fibroid on a woman’s fertility depends on the size and location,” he says.

The uterus has three layers, that is; the inner lining called the endometrium, the wall of the uterus called the myometrium and the outer lining, called the serosa.

Fibroids that grow on the outside wall of the uterus do not affect fertility, but can cause discomfort by compressing other organs, especially the bladder.

Dr Sali explains that fibroids which grow where the fallopian tube joins the uterus wall can compress the tubal opening, restricting the passage of sperms or eggs, thus compromising a woman’s fertility.

Studies show that fibroids in the muscle part of the uterus may cause a reduction of blood flow to the uterine lining making it difficult for an embryo to develop.

However, he maintains that although fibroids may pose a fertility threat, women with fibroids can conceive and have normal deliveries.

Dr Gonzaga Andabati, a consultant gynecologist at Bethany Women’s Hospital in Luzira,   warns that it is not good practice to remove fibroids during pregnancy or child delivery, especially if the fibroid is inside the muscles of the womb.

He says: “The risk to the woman is so high because usually there is severe bleeding and surgery should only be conducted if the surgeon judges that the fibroid is only held at a very thin connection with no much blood supply.” 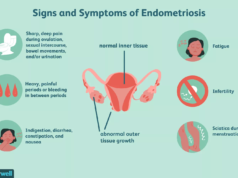 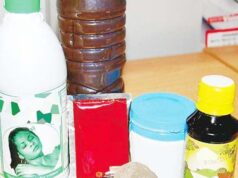