At the age of 16, Kirabo Namutebi is already a swimming medalist. She started her swimming career at about six months of age.

Her mother, Hadija Namanda, recalls every time she exercised through swimming to reduce the post-natal weight, she would put baby Namutebi and her brother Tendo on floaters and swim with them.

By one year, Namutebi was comfortable to be alone on water. At five years, she was already participating in swimming competitions at school, Kampala Junior Academy.

Accolades
Between the ages of 10 and 12, she started winning medals, she has represented Uganda on global swimming stage on several occasions, bagging medals.

For example, in 2016, she was the overall winner of the Seals Invitational tournament held at Kampala Parents School swimming school where she scooped seven gold and seven silver medals.

She was also the fastest swimmer in Kenya Junior Swimming championships in the same year. Namutebi is also a two time gold and medalist at the 2016 and 2018 Africa Junior Championships.

In 2019, she emerged the Real Stars athlete of September, having been the first gold medalist at the continental level in swimming at the Africa Junior Championship in Tunisia.

There, she scooped two gold medals and silver, and it was also the first time the Uganda National Anthem was played at that stage.

In February 2020, she won five medals at CANA Zone 4 in Botswana. She marked her Olympics debut in Tokyo recently, with a new national record in the women’s 50m freestyle. Her swimming in lane eight of the heat 6, clocked 26.63.

At present
Currently, she is in Russia for a swimming scholarship. Soon (in two weeks’ time) she will be in Ghana for the CANA Senior and Junior swimming championship, which is a continental event.

Later in December, she will attend the world shot in Abu Dhabi. Fortunately, she has not had any burnout and is so passionate about what she does, which falls in the bigger picture that her mother envisioned.

“I have been swimming practically my entire life. I was introduced to the sport for safety as well as to help get my asthma health condition better. Surprisingly, I fell in love with the sport,” she says.

Overwhelming support
Namutebi’s mother says in every child, there is a champion and you can never know what they can turn into. As such, she has been very supportive ensuring she puts Namutebi in the right programmes.

In addition, she has always been there for her daughter in every training session that has taken place either in or outside the country.

“I expose and watch her through the journey and ultimately I knew where she would end up,” Namanda says.

Future prospects
Namutebi is working towards the next Olympic Games in Paris, and is optimistic about bringing victory to Uganda. She aspires to give back to the community through sports.

Additionally, she encourages young people interested in the swimming sport to dream big and work hard towards it.

Kawuma dedicates his life to provide for the needy 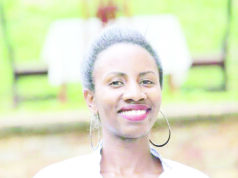 What challenges have you faced in running the Christian race?