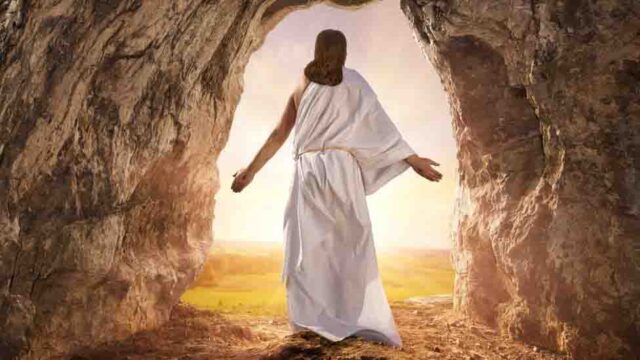 For centuries, Christians have celebrated the resurrection of Jesus Christ on a Sunday, which is three days after remembering his death on Good Friday.

This timeline of three days is based on numerous references in the New Testament of the Holy Bible.

Jesus predicted the three days timeline many times, and the Apostles included it in their announcement of the Gospel.

Jesus’ resurrection took place three days after His death. He could have risen one day, or two days, or even four days after the resurrection would still be historically valid according to the eyewitnesses.

The clearest examples of the third day resurrection are found in Jonah 1:17 and Hosea 6:1-2.

Jesus referred to Jonah’s three days in the belly of the great fish as a metaphor for His resurrection.

This metaphor then begins to develop an outline of a new life emerging on the third day, the creation story in Genesis 1, Abraham’s test in Genesis 22 and the Israelites at Sinai in the Exodus chapter 19.

There are two events in the creation story that stand out as most significant.

Each one of them is happening at three day intervals. On the first third day, God makes the dry land to appear, and causes vegetation to come up out of the earth.

The picture here is of a new life rising up from the ground; a place that has been of non-existence or death.

This is a portent picture of the life after the death of Christ. In another third day event, Abraham is tested by God (Genesis 22:1-19).

When God calls Abraham to offer his only son Isaac as a burnt offering on a mountain, the Bible says that on the third day, Abraham saw the place from a far and he proceeded to go through with the test (Genesis 22:4).

In this scene, God wanted Abraham to learn to trust Him with the covenant and the blessing of his offspring.

However, it was God Himself who provided the sacrifice and brought about the purposes of His covenant.

The connection to the third day theme here was seen in a powerful act of atonement by God in which He substituted a ram in the place of Isaac (Genesis 22:13-14).

This act was wrapped up within God’s covenant project to multiply Abraham’s offspring, and through them, to bless the nations (Genesis 22:17-18). Here again, we see the event happening on the third day.

New covenant
In the Gospel, Jesus was speaking about the third day resurrection when He talked about His death with His disciples. In fact, He mentions “three days” 21 times.

By now we can probably tell that this emphasis was not accidental. Jesus was immovable about the third day because it represented God’s initiative in creating new life and establishing covenant with humanity.

Look at how the Easter event; the resurrection of Jesus Christ; draws onto the third day plan.

One, God resurrected a new life up from the ground (tomb), in this case Jesus Himself.

Two, God brought about the new covenant through Jesus’ atoning death and resurrection, in this case for all who believe in Him.

Three, Jesus’ act of atonement occurred on a hill. The story in Genesis chapters 1 and 2 of new life rising up from the ground on the third day, along with the connection to divine covenant throughout the Scriptures, provided a heartbreaking picture to the significance of Jesus’ resurrection.

On the third day, Jesus’ resurrection was made more significant.

It was the climactic day of God’s project of new life and covenant, beautifully pictured since creation, the climax of which will result in the future resurrection of Jesus’ followers, and the restoration of the whole universe.

When Christians celebrate the resurrection of Jesus Christ on Easter Sunday, they are not just following an historic tradition.

They are engaging in a deeply meaningful religion centered on the third day plan, with all its implications of God’s redemptive work.

The third day design outline was a reminder that God had initiated the process of resurrecting His people to new life, bringing them into His covenant partnership.

The meaning of number 3 originates from the fact that it was the first of the four spiritually perfected numerals.
The three righteous fathers before the flood were Abel, Enoch and Noah.

After the flood there was the three righteous “fathers” of Abraham, Isaac and Jacob.

We also know that there are 27 books in the New Testament, which is 3 squared, or completeness to the third power.
Jesus prayed three times in the Garden of Gethsemane before His arrest.

There were three hours of darkness that covered the land while Jesus was suffering on the Cross from the sixth hour to the ninth hour.

Therefore, this number three is also the number of resurrection. Jesus Christ was dead for three full days and nights, a total of 72 hours, before being resurrected on Saturday, just before sunset.

In the very beginning of the book of Revelation, God was described as a Being with the threefold characteristic, “which is, and which was, and which is to come” (Revelation 1:4).

There are also three great periods of God’s annual Feast days of worship.

They are the spring festivals (Passover and Days of Unleavened Bread), the summer festival (Pentecost) and the fall festivals (Feast of Trumpets, Atonement and Feast of Tabernacles).

Waiting
Each of the Gospels recorded that women were the first to receive the amazing news that Jesus was alive, but they recount it in slightly different ways.

Mark says that there were “many other women who had come up with Him to Jerusalem” (Mark 15:41).

And Luke agrees that there were other women (Luke 24:10).

All these books point out that these women were puzzled when they saw that the large stone that covered the mouth of the tomb was already moved away.

Being that they had moved and experienced miracles from Jesus, they perhaps might have been expectant of Him raising.

But Jesus’ body was missing. The angels told the women who had entered the tomb: “Why do you look for the living among the dead? He is not here; He is risen.

“Remember He told you that He would be delivered into the hands of sinful men, be crucified and on the third day, be raised again” (Luke 24.1-12).

Mary Magdalene, upon discovering the empty tomb, ran to get the disciples.

Though Peter and John had come back to the tomb with her, they were unable to solve the mystery of the disappearance of Jesus’ body and returned to their homes.

But Mary remained in the garden with her pain, confusion, and distress.

Suddenly, as she wept, unbelieving, she saw a person whom she thought was a gardener.

He asked her why she was crying. She explained that Jesus body was missing and that she wanted it to be put back.
Then Jesus called her by her name, “Mary,” and she knew instantly that Jesus was alive.

Mary Magdalene was the first person to see Jesus alive and in person after His resurrection, a woman, and one who had had seven demons, but a woman who followed the Lord (John 20.10-18).

She fell trembling at His feet in worship and joy, and called His Name in Aramaic, “Rabboni!” which means teacher.

She wanted to embrace Him, but He told her not to hold on to Him, for He had not yet returned to His Father.

Instead, He gave her an assignment, “Go and tell my brothers I am returning to my Father and your Father, and my God and your God” (John 20:17).

There are moments of uncertainty in life that push us to a place of doubt, even when we know God is a God of miracles.

The wait can be confusing, empty or even hopeless, but when we stick and stay with hope, Jesus comes through.

Easter reminds us that we can go through the water, but still rise because Jesus conquered loss for us on the Cross.

No matter what you are going through, irrespective of your circumstances, God’s Word will never lie.

If your hope and trust is in God, you will prosper in every crisis and trouble that you are facing. Do not quit. Do not give up.

Do not back out, for hard times are only for a season. Your season of success, breakthrough, and abundance is coming! Celebrate with hope.

This is a call to all of us to believe in our Lord Jesus Christ, who died and resurrected for our sake. 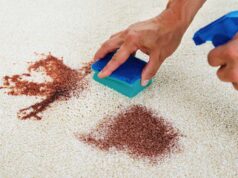 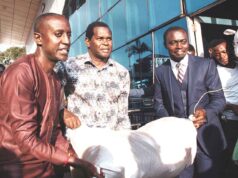 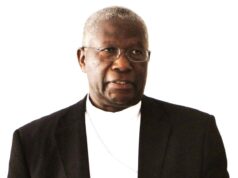