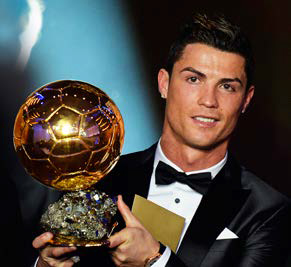 The athletic 31-year-old Portugal and Real Madrid foward topped the poll of 173 journalists worldwide ahead of Argentina’s Lionel Messi and Atletico Madrid forward Antoine Griezmann to cap what was a remarkable 2016.

Ronaldo played a crucial role as Real beat city rivals Atletico in May to become European champions for a record-extending 11th time.

Then, two months later, Portugal triumphed at Euro 2016 in France to claim a major trophy for the first time – despite losing their talisman to injury early on in the final.

Ronaldo, has so far scored 48 goals in 52 games for club and country during the calendar year.

The 2016 accolade went to Ronaldo clear of three-time winners Marco van Basten, Michel Platini and the late Johan Cruyff, while he is now one behind Messi.

Commenting on his triumph, Ronaldo said: “It is a great honour to receive my fourth Golden

Ball. The emotion is like the first one, it is the dream come true again.

“I never thought in my mind to win four times the Golden Ball, so I am so pleased and so happy.

“I have the opportunity to thank all of my teammates, the national team, Real Madrid, all of the people and players who helped me to win this individual award.

“As you can imagine I feel so proud and happy to receive this amazing and beautiful ball.”

“It is important for me, I will try my best, like I do every year. It is a new challenge.

“I love to play football, so I will try my best to win for Real Madrid first, because it is my team, for the national team to win again if it is possible, we know that it is very, very difficult, and to win the Ballon d’Or again next season.

“I will try my best, work hard as always and I will enjoy this moment because it is not easy to win this.”

France Football announced Ronaldo as the winner before it could reveal all the top five contenders in their countdown until much later after over twenty four hours.

finished as top scorer at Euro 2016, where Les Bleus were defeated by Portugal in the final, and he also helped take Atletico to the Champions league final.

Brazil forward Neymar was named fifth in the poll behind his Barcelona team-mate and Uruguay international Luis Suarez.

Ronaldo’s Real Madrid team-mate Gareth Bale, who helped drive Wales to the semi-finals of Euro 2016, was voted in sixth place.

Thirty players in all were put forward on the 2016 Ballon d’Or finals list, which included several players based in the English Premier League.

Leicester’s title-winning striker Jamie Vardy was eighth, with midfielder Riyad Mahrez – the PFA Player of the Year – ranked one place higher at seventh.

Manchester United midfielder Paul Pogba became the world’s most expensive player when he joined Manchester United from Juventus for £89million in the summer, and the France international placed 14th.

Along with Griezmann and Messi, Ronaldo has also been named on a three-man shortlist for The Best FIFA Men’s Player Award 2016, which will be announced at a ceremony in Zurich this January 9, 2017.