Air quality measurement results for the month May around Kampala showed there is a slight deterioration in the quality of air being taken in by city dwellers.

A report by pollution and air quality experts from Kampala Capital City Authority’s (KCCA) department of environment and public health released in May pointed out that while air quality around the city remains moderate, it is increasingly getting unhealthy for groups it termed as “sensitive”. These groups include the elderly, children, pregnant women and the sick.

The report further shows that none of the areas sampled had air quality considered hazardous.

Among the sampled areas, Kyebando and Kamwokya were considered to have unhealthy air with a scale of pollutants from zero to 200, in which they scored above 150 but still not in hazardous zone whose score is over 175.

Some of the other areas sampled included the Kabalagala junction, Rubaga, Kisenyi and Kyanja where the air quality was considered to be in the unhealthy for sensitive groups only category. This group includes children, the elderly, the chronically ill, and pregnant women.

The areas with moderate air quality, which was the highest ranking according to this report, include KCCA grounds Lugogo, Makindye division offices, Kiswa health centre, Kitebi near the health centre, and Nsambya near the American Embassy, among others.

The air quality report advocates and recommends the putting on of face masks in areas regarded with moderate quality as a precaution.

In locations considered to have unhealthy air for the groups categorised as sensitive as per the report which are children, the chronically ill, pregnant women and the elderly, the report recommends these groups to stay away from these places if they can.

The places with air quality categorised as unhealthy for the general populace are strictly to be a no go area for the above vulnerable groups with an extra caution to those inhabiting them. They should not only put on masks but also take extra precaution to guard their own health with an alternative being limiting the amount of time spent in or unnecessarily go to these places.

Comparison with past reports

Research done during the peak of the Covid-19 lockdown period between March 4 and April 4 2020 by Makerere University shows there was a significant drop in pollution levels by a daily average of 40 per cent compared to measurements taken from the two weeks prior to the lockdown.

The report says vehicles are a key contributor to air pollution in the city. In addition, the dust arising from the majority of unpaved roads which make up about 70 per cent of the city’s roads rendered inactive by the lockdown. Part of this drop in air quality was attributed to those two factors besides the change in weather patterns with the onset of the rains being another mitigation.

In general this report concluded that the rampant use of biomass energy or what we call charcoal as a key cooking fuel in Kampala and the nearest neighbourhoods remains a key contributor to air pollution that needs to be checked if air quality is to improve in the city. 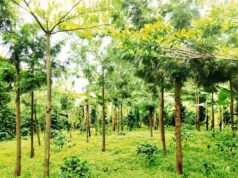