Starting
He started off with 16 local Mubende breed goats and one boar of 75 per cent genetics from South Africa in 2018.
Being a renowned rice grower, Nasoma used proceeds from rice as start- up capital to buy the goats. Each goat cost him Shs150,000.

He constructed a pen which cost him Shs2.5 million. The money was used to buy construction materials such as the wire mesh, iron sheets and nails. He did not spend on timber because he cut trees from his plantation.

In three years, the 16 goats had multiplied to 81. During the recent Eid Mubarak celebration, Nasoma sold off 16 goats which fetched him Shs2.1 million, leaving him with 65 goats.

Challenges
Mainly, Nasoma encounters three challenges while rearing the goats. Towards the end of 2019, over 15 died as a result of immature goats mating with the Boers.

Due to cross breeding, the kids were too big for the goats to deliver. In the process, the goats would struggle and end up dying due to failed delivery.

Additionally, during the rainy season, the pasture is not enough because all the gardens are planted with food crops which leaves the goats with little or nothing to feed on.

On the contrary, the situation is better during the dry season because majority of farmers have harvested.
Nasoma plans to plant more shrubs and feeds to cater for the dry season.

Cows
In addition to the goats, Nasoma rears six cows. Two are hybrid and the remaining four are of the local breed.
He plans to stock more of the diary breed and intensify on milk production.

He started off with one hybrid in- calf heifer. After five months, it produced. All the two Friesian cows are in-calf (pregnant). Later, he bought four local breed cows.

He does not regret investing in cows because on a daily, he collects about 18 liters of milk and sells a liter at Shs1,500.
He plans to do artificial insemination to improve the genes of the cows, so as to boost milk production of the local breed cows.

He also feeds the animals on rice stalk and bran, which help to increase their milk production.

Orchard
Away from rearing goats and cows, Nasoma has an orchard that comprises mangoes, oranges and guavas and soar soap fruits- ‘Kitaferi’ on his 3.5 acre of land. In a season, he picks about two sacks of mangoes and oranges each.

Initially he wanted the fruits for subsistence (home consumption) but lately, traders have been buying the fruits.
“I sell a sack of mangoes at Shs 20, 000 and hope the fruit yield to increase to a maximum of ten bags as the fruit trees mature,” Nasoma says.

Why mixed farming
Nasoma opted for fixed farming so as to maximally utilise the 3.5 acres of land. He says: “Mixed farming comes with advantages. For instance, there is interdependency because I use goat and cow dung as manure to enrich my orchard.”

He adds that sometimes the pruned braches of mangoes, guavas and mangoes act as feeds to the goats and cows.

Aspirations
In the next five years, Nasoma wants to improve his stock of exotic cows to ten, so as to produce at least 200 liters of milk every day.

Being a rice farmer, he intends to use the rice stock and bran to feed the cows.

Advice
He advises the youth who want to venture into rearing of animals to look at it as a business because it is profitable.
“It pays back very well and since Uganda’s population is increasing, there is assured market for meat and dairy products. Additionally, they should take advantage of the good weather that supports proper growth of pasture,” he says.

He worked at Stanbic Bank, Mbale branch for two years but later resigned to pursue farming. He also holds a Diploma in Agro-Business and post -harvest management from Galilee International Institute in Israel. 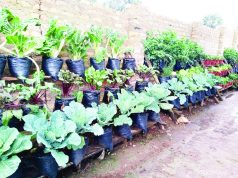 Courtyard farming made easy with planters 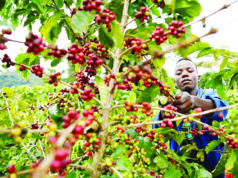 Understanding the value of coffee growing 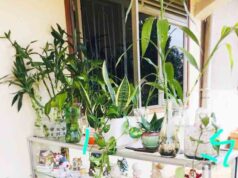