ELIZABETH MWESIGWA’s valor over physical disability is an inspirational, yet emotional series of trials. She told Regina Nalujja about her journey from street beggar to gold medalist and Uganda’s number one para-badminton champion.

The firstborn of six opted to overlook physical disability and become an asset to her family in Iganga. Mwesigwa was born with crippled limbs 25 years ago, and doctors advised she had to undergo an operation. Moving on her knees was the only option, but the protruding tendons that grew on her calf hindered her movement. Her parents, who were always ridiculed by the public, could not afford her surgery. “I will never forget the day my grandmother disowned my parents claiming they gave birth to an outcast,” she says. Nonetheless, she is thankful her family always treated her as a normal person. Her surgery was sponsored in 1998 by Europeans who had come for mission at Tororo hospital. She remained under their custody in Mbale where she was rehabilitated until she recovered.

While in Mbale, Mwesigwa was introduced to the alphabet and numbers. When she returned home, she was taken to Iganga Infants School. Because she was always the best in class, Mwesigwa found favour before teachers and pupils. As she was looking forward to sitting her Primary Leaving Examinations (PLE) in 2009, her mother was poisoned and hospitalized at Iganga hospital for over three months. Mwesigwa was supposed to take care of her siblings because their dad was always doing casual work to get money for his wife’s medication. “I could escort my siblings to the garden to fetch food. Thereafter, I would do the cooking and cleaning, among other chores,” Mwesigwa says. To buy scholastic materials, Mwesigwa and siblings baked and sold bread to neighbours. Two years after their mother was discharged from hospital, their father ran mad and left home. The family searched for him in vain. After PLE, Mwesigwa was brought to Kampala by her aunt. To her disappointment, town life was quite oppressive. Her aunt was renting a small cottage in Naguru as she hawked plastic utensils.

Mwesigwa was put on Kampala streets to start begging for money. However, the hardworking girl in her couldn’t stand this for long. After three weeks, she requested to sell the plastics with her aunt. She sat on the entrance of Nakawa market, calling upon customers. Mwesigwa sold a few commodities while people were sympathizing and giving her free money. She would go home daily with at least Shs 30,000. In 2010, she joined Naguru High School, but dropped out after senior two to look for money.

With the help of a friend in 2012, Mwesigwa tried her luck in selling GNLD products and washing soap. This saw her cross borders for the first time. The two used to visit Rwanda to sell their products. Their trips paid off. They would sell soap mostly to washing bays. They also washed cars for survival. She used to send money for her family back home. She learnt making craft shoes and decorative flowers in Rwanda to complement her income.

Mwesigwa joined a group of wheelchair basketball players in Rwanda. This consumed so much of her time that she quit business for sports. The team was once invited to meet President Paul Kagame at his presidential home. “I got a chance of shaking hands with the president of Rwanda; he also gave us some money,” Mwesigwa says. She also learnt of Kampala Wheelchair Basketball team which she joined on her return in 2015. She was also introduced to para badminton, an indoor racket game. Training took a month before their trainers organized a tournament. Mwesigwa switched to badminton because it is an individual game; the more effort you put in, the more you gain. “I dislike working with a team of lazy people; I put in a lot of effort that has helped me become the best,” Mwesigwa says. She won double gold and double silver from Uganda Para Badminton International tournament in 2017 and 2018 as well as a silver medal from the Dubai International last year. Mwesigwa is Uganda’s number one para badminton star in the SL3 class – a classification for players with severe complications – and has attracted many youngsters to the game. Her dream is to set up a technical school for people living with disabilities in Iganga. She has faced stigma, but has learnt success can outwit humiliation. Simon Mugabi, CEO Uganda Badminton Association, met Mwesigwa in 2015 while he was was organizing Badminton tournaments for Indians. “She was already playing badminton and she requested for a chance to play with the able-bodied players which I granted,” says Mugabi. “… Despite her troublesome past, Mwesigwa remains a powerful, talkative and social girl.” 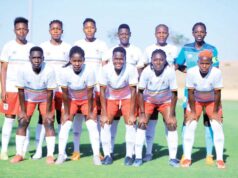 Star players that featured at the 2022 WAFCON 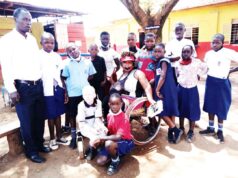